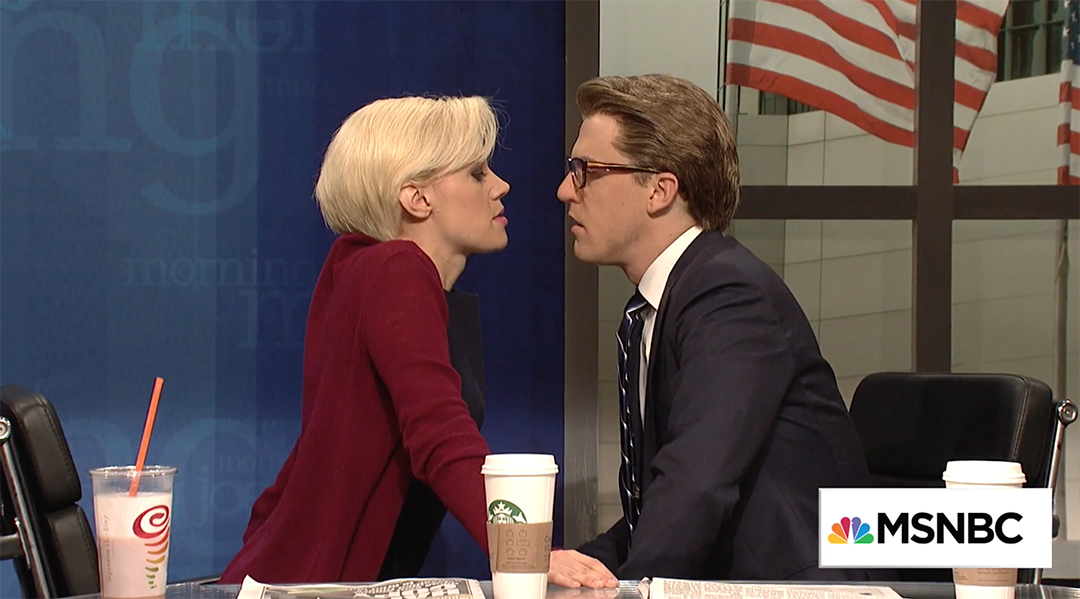 "Mike Mouse, you're being a little stinker!"

There was no Alec Baldwin as Trump this week. Instead, Saturday Night Live opened with Kate McKinnon and Alex Moffat mocking Morning Joe co-hosts Joe Scarborough and Mika Brzezinski. The two announced this week that they are engaged after rumors swirled about their relationship for months.

In the sketch, McKinnon and Moffat tried to relate the latest news and talk to pundits, but kept getting distracted by each other.

“Well, guys, they did it, ok. The House has passed their health care plan which might take health insurance away from 24 million Americans. Many of them are swing voters in 2018. If morality doesn’t matter to them, I mean, maybe just pure politics should?” began Scarborough.

“It’s crazy! I’m up it, I’m over it, I’m past it, I’m in the driveway, the car is running,” said Brzezinski. “This party—your party, the Republican Party—is completely morally bankrupt at this point.”

“Oh, Mika! That’s enough, ok?” Joe replied, turning to Mika. “You’re being snickety because you know it pushes my buttons.”

“Does it? Push your buttons?” she asked, moving in closer. “It does,” he responded, now very close indeed as she tousled his hair.

The two then turned to ask pundits what they think. “What am I seeing here?” said Mikey Day as Willie Geist. “I don’t know… I have so many unanswered questions.”