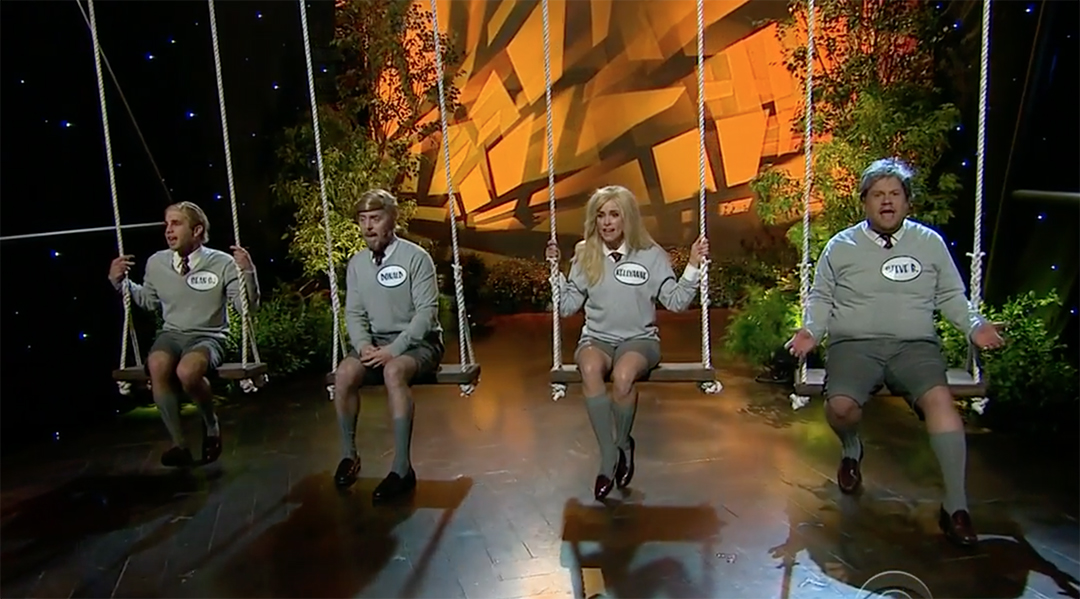 On Monday's Late Late Show, James Corden premiered Donald: The Musical with a parody of "When I Grow Up," from Matilda.

On Monday’s Late Late Show, James Corden premiered Donald: The Musical with a parody of “When I Grow Up,” from Matilda. Corden played Steve Bannon, and joining him on the stage were Tim Minchin as Donald Trump, Ben Platt as Sean Spicer and Abigail Spencer as Kellyanne Conway.

Dressed in school clothes and sitting on swings, the young versions of Trump’s administration sang lyrics like, “When I grow up, I will be president and build big walls, ban Muslims, play with Putin’s balls.” So begins Minchin as Trump.

“When I grow up,” chimes in Platt as Spicer. “I’ll be press secretary of this land, and lie about sizes of crowds and hands. Lie about climate change til Earth is blown up.”

Then Corden comes in as Bannon with “I will be chief strategist, so I can put my Breitbart fist inside my puppet’s inside bits.” Spencer then appears as Kellyanne Conway to say, “And I will wake up to see tweets he wrote at 4 a.m. that I will then have to defend.”

But the song isn’t all biting satire. There’s a bit of hope toward the end, but you’ll have to watch it to see, cause “Nobody else is gonna put it right for” us.