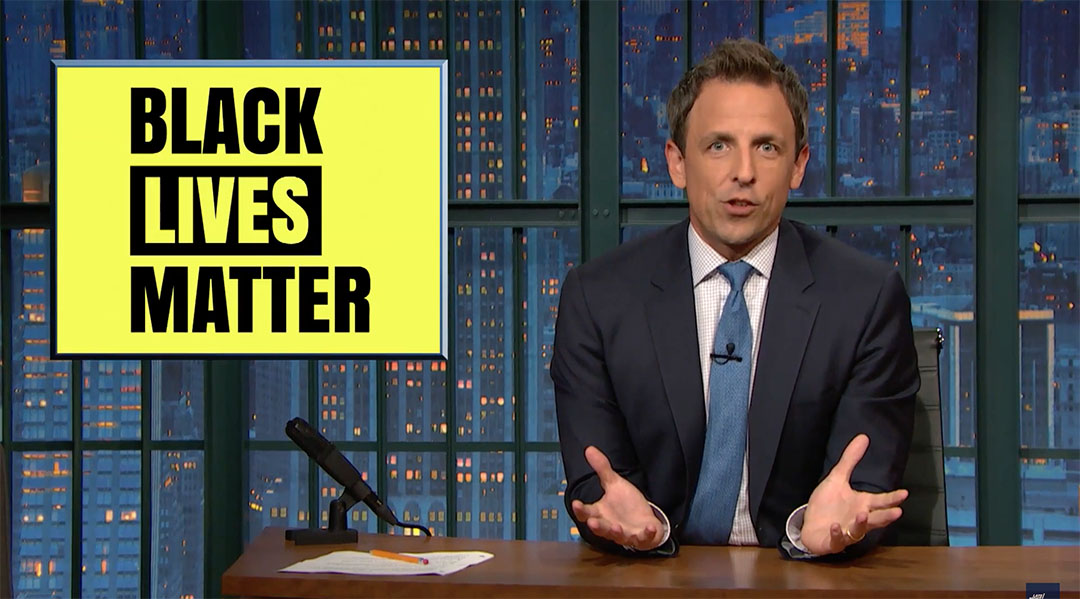 "'Black Lives Matter' is not an exclusionary statement. It just means black lives matter, too."

On Monday’s Late Night, Seth Meyers took “A Closer Look” at the political response to Black Lives Matter following the killing of five officers at a BLM rally in Dallas. Notoriously inflammatory headline generator, the New York Post, announced a “Civil War!” on their front page, which, Seth admitted, is better than their first choice, “Yay, Civil War!”

But Seth argued that there is no civil war in this country. Just before the shooting in Dallas, the police department posted photos online of officers standing with protesters. “There was never a photo that friendly during the real Civil War, unless there’s some Ulysses S. Grant-Robert E. Lee selfie I’m unaware of.”

Seth went on to attack the white politicians and pundits using the Dallas shooting to attack Black Lives Matter, and, for some reason, President Obama. Louie Gohmert said Obama is dividing America, unlike Gohmert’s high school football coach, who “used his race to bring us together.” Meyers said, “I’m not sure it’s a good sign you had to go all the way back to high school to think of a black person you liked. And he used his race to bring you together? Did you go to high school at ‘Remember the Titans?'”

Rudy Giuliani had the worst advice following the unrest, saying if he were a black father, he would teach his sons to respect the police and stay away from gangs.

“Okay, first of all, don’t ever start a sentence with the phrase, ‘If I were a black father,'” said Meyers in response. “If you are a black father you don’t need to say it and if you’re not, you should probably just shut the f—k up.”

Meyers went on to say, “The fact is, black people are disproportionately affected by racial disparities in our criminal justice system — that’s just a fact. And saying Black Lives Matter is a response to that. The problem with you, Rudy, is you’re imagining the word only in there. As in ‘only’ black lives matter, but no one is saying that. In fact, assuming the word ‘only’ in any context is kinda weird, just in general. Like when you see a sign outside a convenience store that says, ‘We sell lottery tickets,’ you don’t assume they mean, ‘We only sell lottery tickets.'”