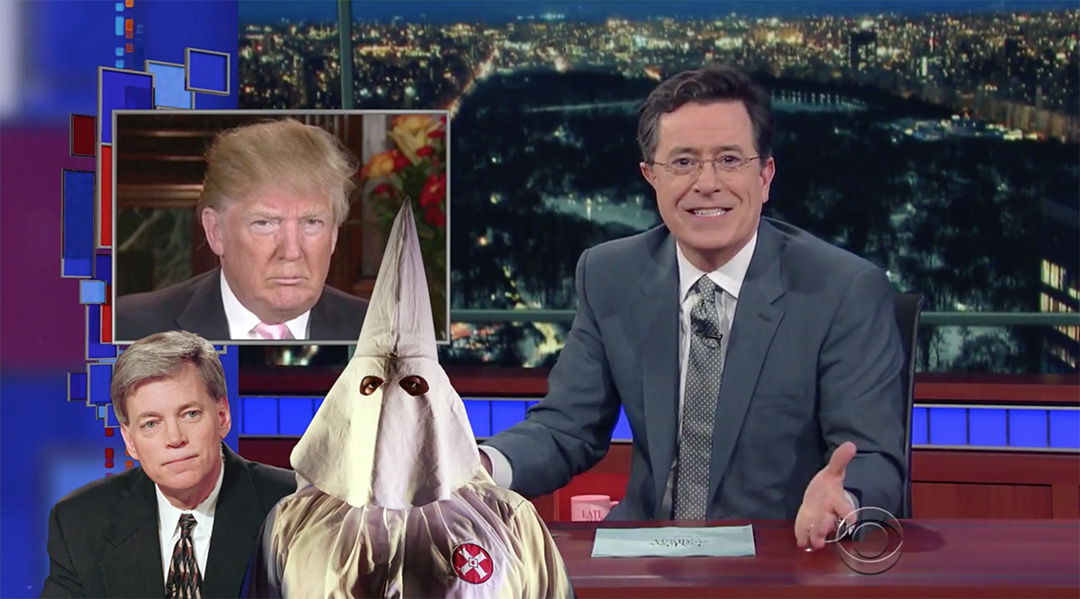 "Yeah, Trump needs to know before condemning David Duke or the KKK — it's not like they are Muslim or born in Mexico. He needs to think about it."

“It’s hard to say this,” Stephen Colbert said on Monday’s Late Show, “but if the polls are right, tomorrow Donald Trump could secure the Republican nomination,” which makes the night before Super Tuesday, “sphincter clinching Monday.” But Trump may have finally made gaffe that could hurt him this weekend after he declined to disavow support from white supremacists like the KKK and their leader David Duke, claiming he didn’t know enough about them. “Yeah, Trump needs to know before condemning David Duke or the KKK — it’s not like they are Muslim or born in Mexico. He needs to think about it.”

Stephen goes on to explain just how idiotic it was for Trump to hesitate to answer. “This is the easiest question to answer in American politics. When someone asks you if you disavow the Ku Klux Klan, just say yes and start high-fiving your future cabinet.” As always, Trump tried to spin things in his favor, this time by blaming the earpiece. But Stephen says, “though I think you should take some responsibility for the mouthpiece. Also, maybe the hairpiece.”